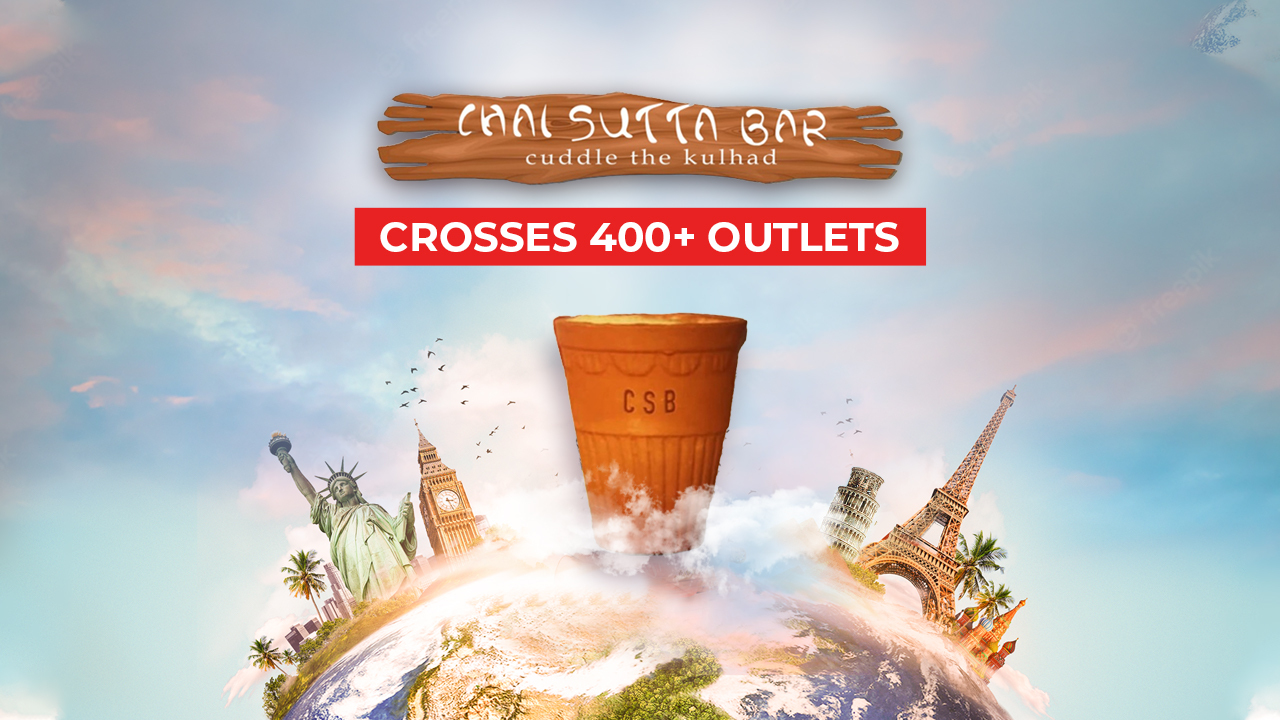 Indore-based tea-selling brand, Chai Sutta Bar, on its rapid expansion spree aims to establish over 1500+ outlets in the country while also gearing up for international expansion. A popular saying goes as such, “Business is not about making money. It’s about making dreams come true for others and yourself.” After all, it is those who believe in their ability to be successful in the things they have a passion for who end up living their dreams. Just ask Anubhav Dubey and Anand Nayak, former school friends and present-day owners of the Chai Sutta Bar franchise in India. Today the company has close to 400 outlets all over India as well as in Dubai, Muscat, Port Blair, and Nepal.

The firm announced its ambitious intentions of opening 1500+ outlets by the end of the year while also aiming to expand into international markets including the UK, USA, and Canada. Chai Sutta Bar opened more than 30 outlets all over India, in various states including New Delhi, Rajasthan, Gujarat, Tamil Nadu, UP, Jharkhand, and Himachal Pradesh, and plans to establish a minimum of 100-200 outlets in the South and North East region of India.

Co-founder of the Chai Sutta Bar franchise, Anubhav Dubey says, “We are very delighted and overwhelmed with happiness to see the rate at which CSB is growing exponentially. The love we receive from our customers is immense and makes us grow more each day. The CSB outlet fills the gap between lovers of chai and Kulhad all over India and soon all over the world. We have so much more to offer in terms of new tea flavors and customer satisfaction.”

Born to a middle-class family in Reva, MP, Dubey shifted to Indore for his education after Class 8. He shifted to Delhi in the year 2014 to prepare for the UPSC exams but soon realized that it was not his cup of tea. He said, “Studying for UPSC needed a lot of academic discipline but I was always tuned towards business and often found myself distracted.” Dubey did not realize his passion for business until he received a call from his school friend, Anand Nayak two years later, in the year 2016. The two spoke about the multiple possibilities of businesses they could open and Dubey returned to Indore in the same year, without informing his family of his intentions to start a business. “We did not know what we wanted to do.

To get some inspiration we went on a biking tour across the city and figured out what was working. What we noticed was that tea stalls were extremely popular and worked everywhere. Anand wanted to take a franchise of McDonald’s but we had only around Rs 3 lakh. It became clear to us that we could only start something like a tea shop.” Says Dubey. And hence was born the idea of Chai Sutta Bar.

The duo started off by launching their first outlet in Indore in July 2016. They aimed to build an Indian café brand with a focus on the most consumed beverage, chai, which is a segment that is normally dominated by international chains. they came up with the rather unique idea of serving chai in Kulhad’s. For their first location, they chose a property near a girl’s hostel and invited their friends for a free cup of tea. The curiosity surrounding these two youngsters and their new business grew and so did customers. They started by selling chocolate tea in Kulhad at the price of Rs 7, a concept which was loved by their customers. Their popularity ensured that the duo was able to open a second outlet just two months later, following which they opened a third shop in Ujjain and the fourth in Mumbai through a franchise route. Dubey and Nayak wanted to create a fresh and positive atmosphere while also ensuring that their products were affordable. Today, Chai Sutta Bar has seven flavors of tea with prices ranging from Rs 10 to Rs 30 while also having introduced food on its menu, making them a full-fledged QSR outlet.

A small-time company that started off by selling 75 cups of chai a day, the chain now boasts of selling 4.5 lakh teas daily. The founders say that from the very start the focus has been on building a responsible café brand. Despite the reference in its name to the word “sutta”, the common Indian slang name for a cigarette, the brand does not sell cigarettes or liquor in its outlets. In its bid to do its bit for society, CSB hires staff from economically backward sections of society or people who are differently abled. They have also made notable efforts to provide brisk business to potters through the usage of Kulhad’s. Through CSB and its competitors, about 1500 small-time families in the pottery business have found employment. “In a day we use 3-4 lakh Kulhad’s, which means we need about 93 lakh Kulhad’s a month, which come from different potters across India.” Says Dubey. CSB stated that it also gives work opportunities to orphans, differently abled, or unemployed people, to better their lives.

The tea- chain which started off with a mere investment of Rs 3 Lakh now has a turnover of a whopping Rs 100 crore. The duo has proven that tea is one of the most consumed products in India and therefore has a lot of business potential. The company registered Rs 10 Crore under its revenues in the last financial year while its franchises clocked over Rs 150 Crore, last fiscal year. Dubey has also announced that they have already registered a company in the UK to expand into the UK, the US, and Canada. “We aspire to reach the 1000-mark in the next year,” says Dubey while placing his faith in his franchise business model of expansion. A large number of his franchise partners are people who have been their customers and most of them are middle-class people who have passion and dedication for the business.