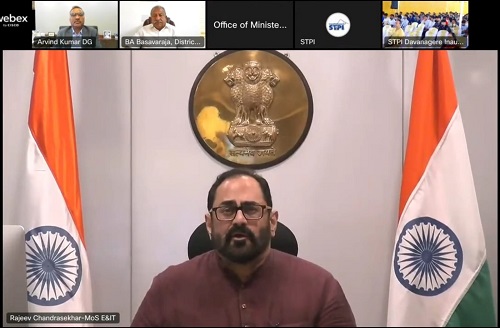 Hon. PM Modi’s vision is to ensure that every Young Indian gets an opportunity to participate in India’s vibrant Startup & innovation ecosystem: MoS Rajeev Chandrasekhar

Speaking on the occasion, Shri Rajeev Chandrasekhar said, “The STPI, Davangere will soon usher in new opportunities for jobs and entrepreneurships for the people in the region. It is our PM Narendra Modi Jis vision to ensure that every Young Indian gets an opportunity to participate in the India Techade initiatives taken by the Government.“

He said the Government’s emphasis has been on the growth of IT/ITES/ESDM Industry in the newer cities, and that it should not be confined to the metropolitan centres.

This is the 63rd STPI centre in the country and the fifth in the Karnataka.

Stating that India has the fastest growing innovation system with more than 80,000 Startups and over 107 Unicorns, the Minister said the world today looks at India with awe and respect. “We have assumed the presidency of the G20, a league of world’s largest economies and also the GPAIan international initiative on Artificial Intelligence. It is the fastest growing major economy that has surpassed the UK to emerge as the fifth largest economy, receiving its highest ever FDIs of $83Bn.”

Shri Arvind Kumar, DG, STPI in his speech affirmed, “Spread over 10,000 sq. ft. area, Davanagere facility is 5th sub-centre under at STPI- Bengaluru. It has state-of-the-art incubation facility to promote growth in IT/ITES services and build a resilient startup ecosystem.”

Among other facilities, the Centre has plug-n-play 102- seater Incubation facility, Network Operations Centre (NOC), 16-seater conference room, and 32-seater cafeteria and provision for providing high-speed data communication facilities and other amenities & services required for the export of software & services.