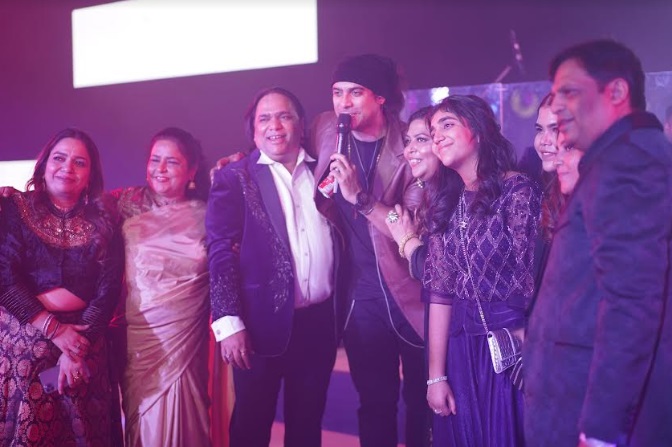 Popular singing sensation Jubin Nautiyal performed at Mahagun Group’s at the launch of its new project, Mahagun Medalleo, on 23rd November, held at India Expo Mart located in Knowledge Park 2, Greater Noida. He crooned some of his famous songs like ‘Tum Hi Aana‘, ‘Meherbaani‘, ‘Taaron Sa Shehar‘, ‘Manike‘, ‘Kinna Sona‘ and ‘Kaabil Hoon‘, among many others.

Amit Jain, Director, Magaun Group and his family with Jubin Nautiyal at the launch of Mahagun Medalleo

Mahagun Group organised a grand-scale event to unveil its new luxury project in Sector 107, Noida and also released the fine logo of the project. The late evening event saw the attendance of many noted dignitaries, developers, investors, and journalists in the presence of whom Mahagun Group announced the launch of the latest project from its M-Collection. The uber-luxury housing is one of its kind residential project in Noida named Mahagun Medalleo.

At the event, Mahagun Group also recounted its entry and journey into the luxury real estate sphere twelve years ago in 2010. Mahagun M-Collection is a term which has been created to refer to all its luxury projects like Mahagun Mezzaria, Mahagun Mirabella, and Mahagun Moderne, among others.

Amit Jain, Director, Mahagun Group, said, “Mahagun Group has always committed itself to upgrade the standards of luxury living in India. We started our journey to provide sustainably built luxury and uber-luxury homes to a massive number of buyers who are interested in investing their money in high-end projects. As the population rose, the demands also shot up. We have received a positive response from our associates and friends on the project launch event.”