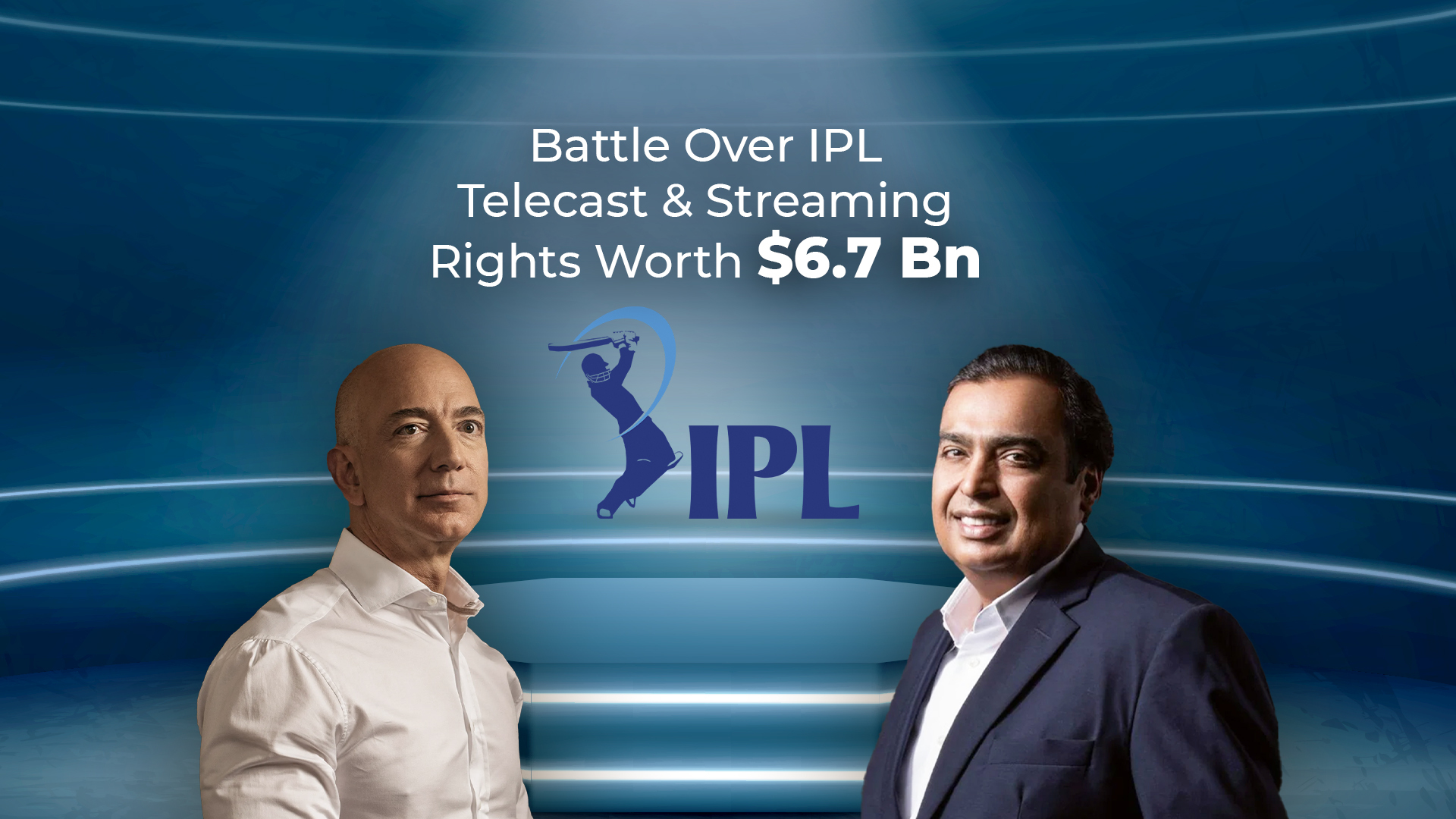 Indian Premier League, popularly known as IPL, is much more than cricket. Not only do the fanatics go gaga about it, but franchises, players, and sponsors also fight hard to stay top in the table.

The recent tiff is reportedly between Jeff Bezos‘ Amazon and Mukesh Ambani’s Reliance. After locking horns in the courtroom battle over the acquisition of assets of Future Group, another big Indian retailer, the two retail giants are now battling for the telecast rights of IPL in the OTT space.

Amazon is expected to take on Sony India for the TV space and broadcast on Prime Video, its OTT space if it wins the bid. Reliance Industries has channels (Colors, ETV, MTV India) under the Network 18 group and is expected to take on Disney India, whereas JioTV is in the OTT space. As per Reuters, the exclusive five-year rights for TV and digital broadcast can cost up to a record 50,000 Cr ($6.7 Bn).

Interestingly, Reliance is trying to raise $1.6 Bn from the investors globally for its broadcasting joint venture, Viacom18. It has recently set up a sports channel after buying the rights for the Spanish La Liga, whereas Amazon stepped in streaming live cricket matches from February 2022.

The battle between the giants is getting intense; the Board of Control for Cricket in India (BCCI) is all set to make profits and generate excellent revenues by selling OTT streaming and TV rights separately.

Starting in 2008, IPL was broadcasted on Sony India until 2017, followed by Star Networks, which won the rights until the 2022 edition. With the OTT sector getting popular in the country, Disney+Hotstar won the bid to stream the league in 2015.

The current deal is with one of the top IPL broadcasters, Disney-owned Star India, who, along with Sony+Zee, have paid INR 16,348 Cr for the digital and television rights until 2022. Now, all of these contracts are getting expired this year.

The year 2021 witnesses 350 Mn viewers during the first half of the season itself. While everybody was locked up during the first year of the pandemic, IPL was a good distraction to keep the audience hooked to the screens. Also, the OTT platforms were a big hit and became more popular post covid. With IPL streaming on Disney+ Hotstar, they added nearly 10 Mn subscribers during the quarter of the year 2020.

This surge in audiences’ interests in the digital sector and OTT platforms has made the battle to win for the rights of the Super Bowl-equivalent Indian Premier League (IPL) quite exciting. It will be a feather in the cap for the winning side, and it’s not less than any trophy.

Mahindra & Mahindra Ltd: A Federation Of Companies, Bound By One Purpose To Rise And Inspire Legacy And Values