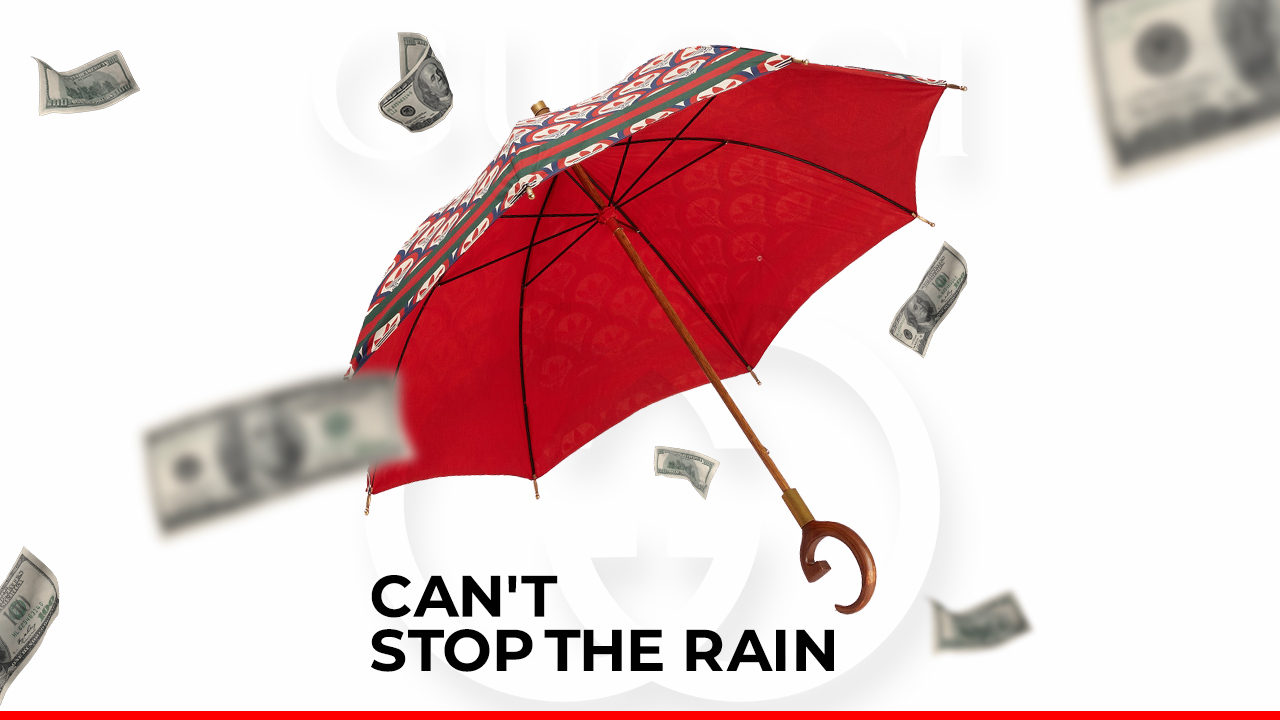 Luxury brands collaborations are the new trendsetter nowadays. Every brand is nowadays looking for a partner to launch exclusive and limited collections and create buzz in the marketplace. One of the major benefits of such collaborations is the amount of attention it gets from the media and loyal customers of the respective brands.

One of the recent collaborations that was added to the list was of Luxury label Gucci and sportswear firm Adidas AG who launched an umbrella worth 11,100 yuan ($1,644). However, the super expensive and fancy umbrella got successful in creating headlines but for all the wrong reasons. The much hyped product has drawn the ire of people in China as it is not waterproof. Imagine buying an umbrella that doesn’t save you from rain but drench all your money for its design.

Earlier described as an umbrella, Gucci website has now changed the classification to “sun umbrella” or a parasol, and has specified its properties as protection from sun or for decorative use, as per a report in Bloomberg. The brands are now claiming that the product was never designed to protect from rain in the first place.

Verily, the collaboration and its product has received a lot of backlash and criticism from the customers over social media. People were mad at the carelessness of the two giant brands and shared their disappointment over Twitter. A Twitter user Cubist shared the picture of the umbrella and wrote, “Warning! Umbrellas are not waterproof!” while tagging the brands. Launching an umbrella under a collaboration which doesn’t even serve its primary function has irked many and has impacted the image of the brands.

Made in Italy, the design for the umbrella is entirely inspired from the era of 80s and 90s. The design is validated and explained at the Gucci website as, “Emblematic House’s motifs mix with those of the historic sportswear brand Adidas resulting in a series of hybrid links.”

As far as the print of the umbrella is concerned, the design is equipped with some stripes and GG monogram. Mentioned in the website, it says, “The Web juxtaposes with the three white stripes, and the GG monogram combines with the trefoil.” The umbrella has a carved birch-wood handle and is inclusive of  eight ribs.

The “common prosperity” campaign by Xi Jinping, the President of China has also received harsh criticism on excess prompted by him leading to the backlash on the luxury brands. Western brand Adidas is already struggling to sustain the brand’s identity amid the increased scrutiny faced by the luxury brands in China as the support for local brands is getting immense popularity. People are now supporting brands that are home grown rather than going out of the way for luxury brands, as per Bloomberg.