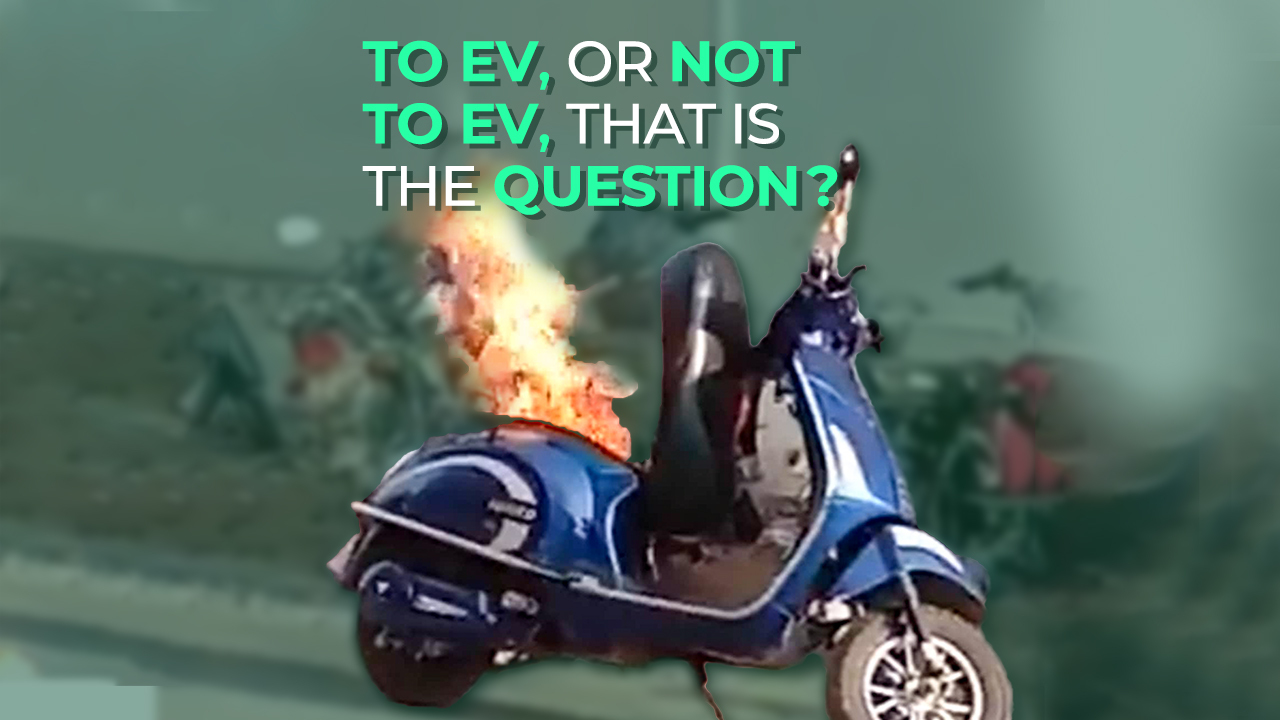 Over the last few years, substantial growth has been witnessed in the EV sector, mostly in the two and three-wheeler segments. Ever since electronic vehicles have been introduced in the country, people have been more or less excited about the fact citing various reasons. The surge in petrol prices is further acting as a fuel for people to think about switching to the electric vehicle segment, as it seems promising in the long run for the expenses and the climate.

While the growth is promising, a few challenges need urgent attention as they might backfire in the journey ahead. On Tuesday, videos of an electric scooter model of Pune-based Pure EV went viral as it got engulfed in flames in Chennai. A thick smoke supposedly from its floorboard and under-seat storage of the Electric S1 Pro Scooter was seen that eventually led to the incident. Three other incidents happened in the same week, putting everyone in doubt about the quality of batteries being used in the vehicles.

Incidents like these are an eye-opener to a possible issue that can become massive in the longer run. Maybe it is the substandard battery quality or the lack of knowledge about batteries; premium quality batteries should be assured in every vehicle to avoid such instances. The sudden temperature rise can also be a reason for such incidents, as the number of vehicles catching fire increases in summers. Therefore, it is important to ensure that the vehicle stays cool to avoid any rupture in the battery cell.

The government should intervene to ensure the manufacturing, supply, and usage of premium quality batteries, implement a battery swapping policy effectively, create awareness in public about the disadvantages of cheap batteries, and awareness about EVs’ safety and operating guidelines.

The ongoing war between Russia and Ukraine has led to a surge in battery prices. With batteries accounting for almost 50% of the EV cost and the country’s heavy dependence on the import of raw materials like nickel, cobalt, and lithium, which are needed for battery cells, a substantial rise in their prices has also increased the overall EV pricing to almost 25-30 percent in a month.

Apart from the geopolitical crisis, the pandemic and its impacts can still be felt as rising cases in China had a major hit on imports. Amid the worldly crisis, all we need are favorable policies to support the indigenous manufacturers and suppliers to increase EV battery availability at competitive prices but within the budget of the majority of the population.

And the fact that we have commenced our race in the EV sector should not deviate us from enhancing our overall perception. Vehicles are all about safety, and EVs being the future, manufacturers should pace the adoption from the safety and longevity standpoint.

Nitin Gadkari Rides In Toyota’s Mirai, An FCEV, To The Parliament.

Thar NFT Makes A Record, Anand Mahindra Is Thrilled To Sell One That Is ‘Almost As Expensive As Buying The Real One.’